A while ago I discussed the idea of an integrated Maxi controller, which would include the Windows processing power to run Smart SDR, the Host controller application and other station software such as logging a program.

My evaluation of the Udoo X86 Ultra concluded that it was man enough for the job, so I set to designing the beast. My friend with the CNC milling machine cut me a new back panel and this evening I managed to get it all constructed and working.

The big advantage of this approach is that it considerably simplified station design. Instead of two or more PCs, with lots of connections to the radio, controller and other peripherals, a large proportion of the station is now in just two boxes - the Flex radio and the integrated controller. Time will tell whether this is a sensible layout but I have a good feeling about it, at least for the sort of station I want to build.

The additional components, over and above the Maxi controller are: 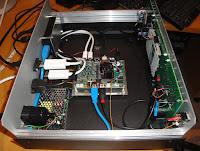 The PSU wasn't really necessary, as the power draw is low enough that a simple 12V 2A "wall wart" PSU unit would suffice but it seemed to me that as I was building an integrated system the PSU should be integrated as well. The USB hub is mounted on the back panel and provides connectivity to peripherals such as mouse, keyboard, sound card, WiFi dongle and so on. I think seven ports will be more than sufficient.

Other connections on the back panel are two HDMI outputs, each capable of supporting a 1920x1080 display, a wired Ethernet port and, of course, the mains power input socket.

I plan to take the new controller down to the G3WOS bash this weekend, so if you'll be there you can see it in the flesh.
Posted by John Linford at 23:44:00