Things are moving along quite well, somewhat to the detriment of other things I really ought to be doing, like getting on the air or going flying. That's how I tend to operate in the early stages of a project: all or nothing!

Yesterday I got the filter width and shift control logic working. This turned out to be more tricky than I expected because the Flex allows you to do silly things that you would never want to do in practice. In this case simply increasing the width eventually results in the lower edge of the passband moving through the zero beat point and on up the other sideband. This is unlikely to be what we wanted. So I devised some logic to extend the filter edges symmetrically until the LF edge reaches zero beat and from then on only extend the HF edge.

The pictures show, respectively, bandwidths of 600Hz, 1200Hz, 2000Hz (showing asymmetric edges) and finally, 1000Hz shifted HF by 700Hz, all as selected by my controller. They also show what  a rather wide CW signal looks like on the waterfall. I've seen far worse! 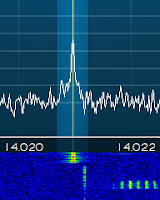 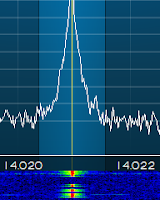 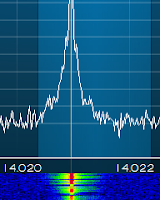 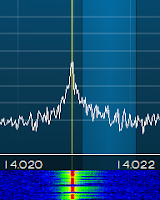 The controls work very well and are impressive in use but I can already see that all I've done is fix a single invocation of the problem - USB CW. LSB CW will require the logic to be reversed and USB/LSB single sideband will require yet another approach that I'll have to think about carefully. Not being an SSB op, this might be rather low priority.

Shift, by comparison was easy to implement and is, again, quite good fun to play with. The two controls together make it easy to explore the Flex radio's filter performance, which is, to say the least, impressive.

As reported earlier, I determined the cause of  the VFO tuning crash but have done nothing more than note it in my project To Do list for now. I have also given more thought to panel layout and the physical control requirements, which I have decided can be simplified somewhat.

By now I feel that I am reaching the point at which proof of concept has been achieved. There is still a lot more software to write (I doubt I've done 5% of it yet) but there should be no major new concepts that need to be designed and debugged. I feel that I know how to drive the Flex API now, so most of the work to come will be concerned with making the panel interface highly configurable. I also have to learn how to program the display but I can't start on that until the slow boat from Hong Kong arrives at these shores.

So I think I am now on to physical implementation issues - panel layout in particular. I have some important decisions to make on the type and shape/size of cabinet. Bigger than a K3 but a lot smaller than an FT5000 I think. I shall be writing more about this over the weekend... stay tuned.

Finally, I have to report, I accidentally made a QSO with the Flex yesterday, in the middle of testing some software. I was tuning around 20m and came across TI5/N4YDU who was a colossal signal and rattling along at 30 WPM plus. One call and I was in the log and had broken my duck with the Flex 6500. It's nice to know that the radio does, in fact, make QSOs...
Posted by John Linford at 10:07:00