Back to one Arduino

Earlier I discussed the issues I was finding with trying to implement a dual Arduino solution with the I/O devices on a separate microcomputer. Today I finished moving the code onto the main processor and at the same time I properly implemented the VFO logic so it is configured via the Profile file in the same way as the rotary encoders are. This means that the mapping between VFO knobs and slices is completely soft, as are parameters such as tuning speed.

Martin Lynch is a star! He has provided a couple of nice weighted VFO knobs which arrived today. It's amazing how something so simple brings the project to life: tuning felt strangely flat and uninspiring. With the weighted knobs the VFOs spin up and down the band perfectly. I do like a decent flywheel action and this is now even better than my old FT1000D was years ago. One quick flick and off up the band we go! 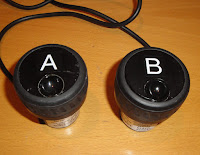 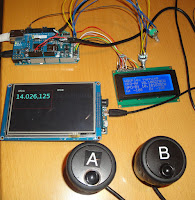 Above you can see the VFO-A & VFO-B encoders decked out with their spinner knobs. The right hand picture shows the development system as of today, with just the single Arduino, a pair of rotary encoders and the two VFO encoders, as well as the old display, which is displaying actual Flex information, and the new display, which is not... yet.

Which brings me neatly on to the results of bringing the VFOs and encoders onto the main processor. What a difference! All the lag has disappeared and the tuning feels just like a "proper" radio. The combination of this software change and the weighted VFO knobs is something I feel I can be entirely happy with.

Tomorrow is a flying day and it's BERU, sometimes referred to as the Commonwealth contest over the weekend, so there probably won't be a lot of progress to report until early next week.
Posted by John Linford at 21:30:00