A wet weekend and nothing much on the wireless up here in sunny Cumbria has provided the opportunity to do some in-depth thinking about the architecture of the Mk II controller. I'm getting a better handle on it now and I think it will look something like this: 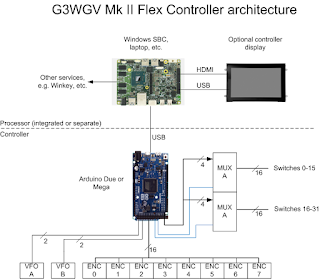 At the top is the Windows-based processor. You will note that this is now shown as potentially separate from the controller and this is possible because there is in effect only a single USB connection between the processor and the controller. This has very interesting ramifications: the Windows processor can now be any suitable machine: a single board computer which may, or may not, be physically integrated with the controller, or it might be a separate PC of any sort, including a laptop.

The controller is now merely a bunch of physical controls with an Arduino to marshal the various control inputs and aggregate them into a serial feed to the main processor. All the heavy lifting is now done in the Windows machine and the Arduino is merely an I/O processor.The Arduino code is very simple and would need no configuration. One could envisage it piggybacking on the back of the controller front panel.

Gone, now, are all the wires between Arduino and panel. Gone, also, is the complexity of having to configure the Arduino code. Because the I/O task is really quite easy, I am sure that an Arduino Mega, with its much slower processor compared to the Due, would be up for the job. The control interfaces amount to 32 I/O pins, so the smaller Arduinos will not do the job but a Due or Mega should both be just fine.

I think this is a very interesting looking architecture. Implementation become much simpler, there are numerous ways to build it that could make for extremely complex home-based controllers or simple  "hotel room" systems, with or without a separate PC. Furthermore, I already have virtually all the Arduino code from the Mk I project that can be reused.

Because the PC manages the display(s), the controller display, if needed is simply another display in a multi-screen Windows environment. In other words, this architecture could implement everything from a simple control pod with no display right through to a dual VFO controller with eight encoders and 32 switches. In fact one could go further: with two Arduinos one could have twice the number of controls. Now that would be one big controller!

This architecture will also be considerably easier to implement for non programmers. The Arduino code will be simple and require nothing more than an upload to the device. The Windows application will be a standard Windows install package. Connect the two together with a USB cable, wire up a few controls and away you go.

I have some components on order... can't wait to get started on this!