With the 6500 back in service I have been able to add some further functionality to the Mk1 controller. In particular, I was keen to improve the user interface following on from early experiences before the radio went on vacation.

What's the control doing?
Each rotary encoder can have up to four discrete functions and it's useful to a) be able to see what exactly it is doing and b) what the current value is. I quite like the way in which the Maestro has done this with a pop-up that says what the control is and what the current value has been set to. So I've implemented a similar pop-up on my controller. A yellow bar pops up whenever a control is changed, as you can see in the picture. 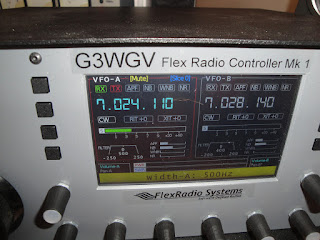 In this case I have just tweaked the VFO-A width control. As you can see, the pop up shows the value and also, rather neatly, units (Hz in this case). The pop up stays there for one second, which is, I think, long enough but that is very easy to change.

Which control set am I using?
I referred earlier to the problem with switching between the main and secondary set of encoder functions. I decided to try my idea of having the secondary set "time out" and return to the primary set. This really seems to work. I've not had any difficulty with tweaking the wrong control since I did that. I think that it's here to stay, although I might make it a user option.

What button do I want?
Since any button can be configured to perform any function, it is a good idea to be able to easily find out which button is which. So I now have a screen display that shows this 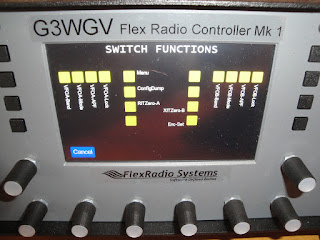 It remains to be seen how useful this is. In discussions with a few others I'm coming to the conclusion that it might not be too much of an issue - people learn where the controls are quite quickly.

More hands-on testing required. It's a pity that conditions are so poor today!
Posted by John Linford at 17:53:00