PCB is in Fab!

Today I received and approved the final PCB layout. It has now been submitted to the PCB shop for manufacture. I'm getting two boards done so I have a spare in case of disasters! If anyone else decides that they want one to play with then it will be easy and comparatively inexpensive to have more made.

In the end I accepted a 12 day turn around for the PCB as it was quite a lot cheaper than the five day turnaround. The PCBs are costing GBP98, of which GBP50 is a one off set up charge. That doesn't seem unreasonable for what is really quite a large double-sided fibreglass board with a proper silk screen. 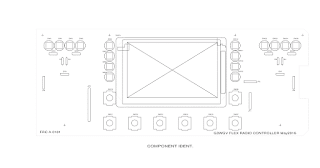 It's been a time consuming and surprisingly complicated process to get from the basic idea of a PCB to one that can actually be fabricated. I could have just done it with bits of Veroboard but now I look at the complexity of the wiring I am glad I decided to do the job properly!

The front panel design is also ready to go to production and I should have that back at about the same time as the PCBs. It will be really nice to get the rat's nest that is my current prototype all neat and tidy. I've more or less got as far as I can with the rat's nest anyway.
Posted by John Linford at 11:50:00