Happy New Year to all my readers.

I finally did it! As a new Year's present to myself I've at last made the Flex 6500 and my Mk I controller the main station radio. In truth I've been using it for several months and the FT5000 hasn't been turned on in as long but today I moved the FT5k out of the shack and the Mk I controller took its place at the main operating position. 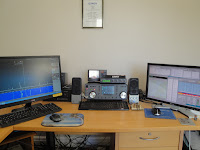 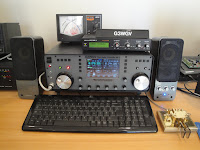 I've made a bunch of QSOs to check that everything is working OK. It is. Of course this isn't the end of the story, not even by half - there's the Mk II on the horizon and to be honest I really need to redesign the layout of my station rather than just plonking the controller in place. But that's for another day. Right now, I'm off to make some more QSOs.
Posted by John Linford at 13:51:00