I've had a pretty productive week on the Mk II controller software development front. The display panel is now more or less finished: 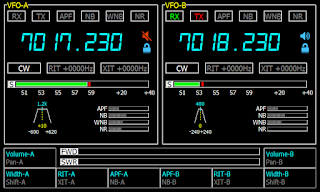 The layout is more or less identical to the Mk I screen, for the simple reason that it seems to work nicely from an ergonomics perspective. There are a few nice new features that were easier to implement in Windows than as native Arduino code: 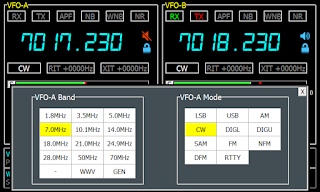 This is brought up by pressing the programmed band/mode switch or by clicking on the mode indicators in the main screen. Band/mode selection is achieved by clicking or touching on the relevant pad.

Pretty well all the code behind the screen is now completed, so I am now somewhat ahead of myself in software terms and I really need to get on with the new PCB layout so I can get that into fab. Can't do that until some hardware arrives on the slow boat from the far east. Thinks... perhaps I should go and make some QSOs and stop sitting in front of this computer all day. Or go flying, or something.
Posted by John Linford at 23:12:00