There are several software components that make up the Mk II controller. These are:
The first three of these are written by me. The relationship between these program components is shown in the following diagram

This is a fairly straightforward program written in C, which is compiled and run "bare metal" on the Arduino Due. Its purpose is to handle all input and output for the controller, sending control changes and receiving display information from the Host controller via a USB port.


Almost all transactions are from the I/O controller to the host. One exception is the four VFO LEDs (VFO A Rx/Tx and VFO B Rx/Tx). These LEDS are lit on command from the host and can also show controller status information:

The host controller program also manages the operator interface through various screen windows. The principal window is the Controller window, which shows the current status of the slices and radio functions that the controller is working with.

The intention is that this window, which is exactly 800x480 pixels should be displayed on the 5" LCD that is part of the controller. However, there is no absolute requirement to do so. It can go anywhere you like on your windows desktop. 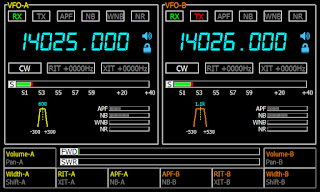 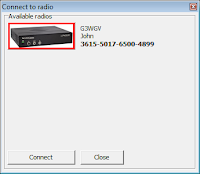 Finally, primarily for development and diagnostic purposes, there is an API and I/O traffic viewer window that permits the user to see all traffic transiting across the various interfaces. Useful if you want to really understand how the API works! 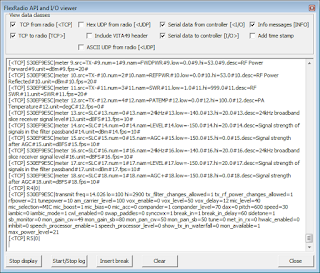